Microsoft Defender for Business – How to use it, and what are the differences with P2? 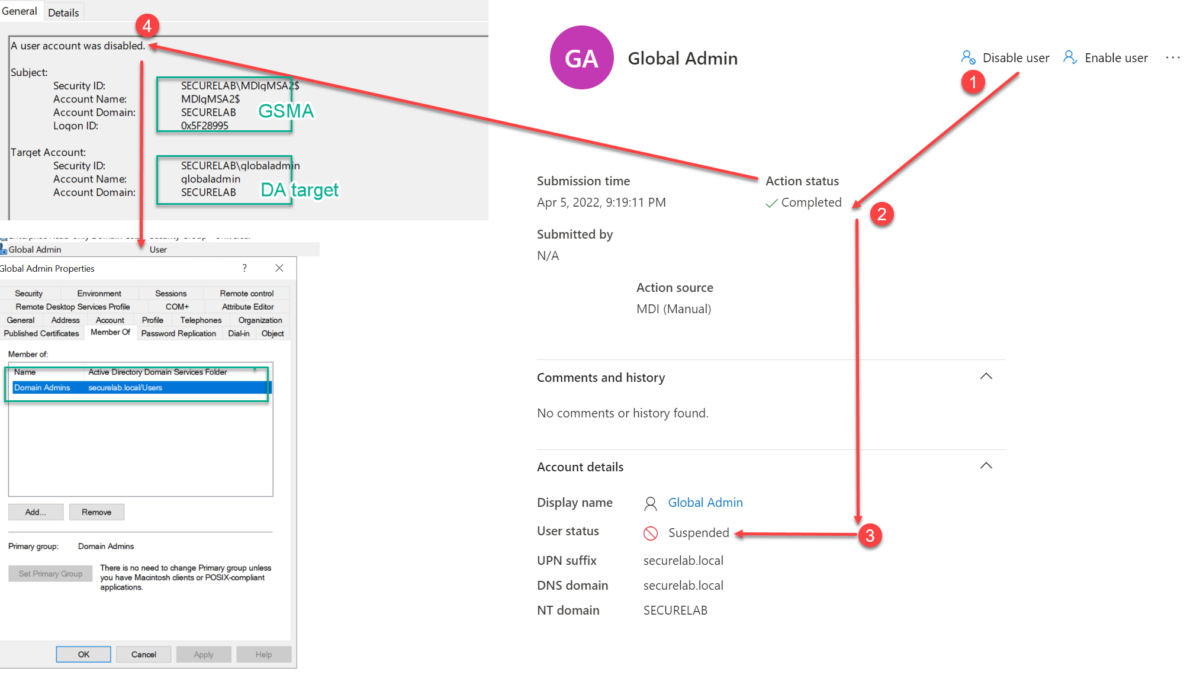 Microsoft announced recently the public availability of the native response actions in Defender for Identity. Security teams can now directly impact the on-premises AD account from one single experience part of the Defender security portal.

In this blog post, the new long-awaited response actions part of Defender for Identity will be explained. Currently limited based on two actions for on-premises accounts.

With the use of Defender for Identity Response Actions, it is possible to directly target on-premises Active Directory accounts during the investigation from a central location and quickly respond to compromised identities and stop directly further damage and attack persistence.  The ability to configure an action account for Microsoft Defender for Identity is supported by release 2.169.

The previous challenge was mostly based on on-premises identities. For cloud accounts it is quite easy to disable the user, mark it as compromised, prompt for multi-factor authentication, or reset the password. The issues start when the identity is part of the cloud and on-premises environment. Disabling users on the Azure Active Directory will be overwritten by the next sync.

Recently Microsoft announced the new response actions for Defender for Identity. Which makes it possible to directly assign actions directly on the on-premises accounts.

The following actions are newly announced and available for on-premises accounts:

The following prerequisites are needed before correctly using the managed action accounts.

It is not documented which permissions are required for performing the user action. Below is founded during the blog creation:

Before group managed service accounts can be created a KDS root key needs to be available in the Active Directory environment. If a KDS root key is not yet created, it is recommended to create it at least 24 hours before creating the gMSA accounts.

For checking/ creating a KDS root key use the following commands. When the KDS Root Key is already available, no further action is required for the KDS root key.

Replace the values for the gMSA’s name (MDIgMSA) and the Active Directory domain (securelab.local)

Don’t forget to assign AllowedPrincipals using the following parameter; -PrincipalsAllowedToRetrieveManagedPassword. Include all the machines where Defender for Identity is running. Ideally based on groups.

Use Get-ADServiceAccount for validating the gMSA configuration. Replace the value for gMSA name (MDIgMSA)

Microsoft gives guidance for creating/managing action accounts for Microsoft Defender for Identity. As already explained by Sander/ Dirteam.com additional configuration is recommended. Another recommended blog is published by Christopher / Medium.com.

The following is advised:

Based on my test environment the following situations are the case:

The following AD permissions are required for the MDI action account:

The new feature can only be used in the Defender Security Portal. In the MCAS or MDI portal there is no UI action visible. The following ways are possible for performing the user actions;

Go to Defender Security Portal and use the Unified Search for opening the specific user page or open the user page directly from other blades (alert/ incidents). All the response actions are visible directly from the detailed user page.

After clicking Disable User, a warning is visible followed by a confirmation of the action itself. The confirmation is only the status that the process has been initiated. It is no confirmation that the action is correctly performed against the AD user object.

Action can be validated as part of the Defender Action Center history. Below are two situations ( succeeded, failure). Important: User status is the actual result and not the result part of the action itself.

Disable user action can be validated in AD based on eventID 4725 and 4738. When the logs are ingested into Sentinel, you can use KQL to directly hunt for specific actions performed by Defender for Identity response accounts or use Advanced Hunting in M365 Defender.

Force Password Reset is only available for AD and Hybrid Users.

Validation is exactly as described above in the disabled user flow. Force Password reset will prompt the user to change their password on the next logon.

Important: When the property; “Password never expires” is enabled for the user, it gives no reset. The action shows as success in action center.

Succeeded changes in the attributes can be reviewed using EventID: 4738.

MFA prompt spamming/ MFA fatigue - What can you do to prevent/ detect attacks?

Microsoft Defender for Business – How to use it, and what are the differences with P2?